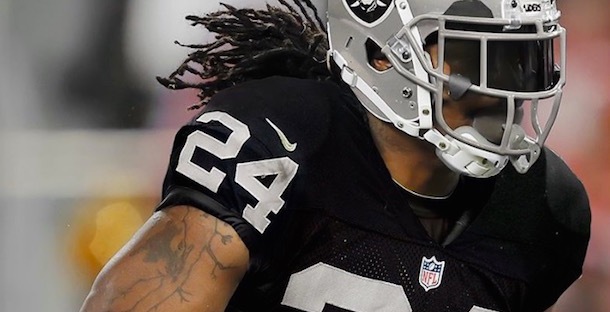 From an X’s-and-O’s perspective, the Oakland Raiders free-agent signing of Marshawn Lynch to a two-year contract is somewhat puzzling.

It is well documented that the shelf-life of an NFL running back expires rapidly, especially after the age of 27.  And considering the mileage on this particular 31 year old, one can’t help but wonder why the organization would elect to call upon Lynch to replace the production of former feature-back Latavius Murray.

It’s possible that Lynch will have a positive impact on the field, as his career numbers showed little decline until a 2015 abdominal injury.  Yet, luring Marshawn Lynch – a proud Oakland native and a strong presence in the community – out of retirement was more of a public relations maneuver than a football operations decision.

As you may have heard, the Oakland Raiders will be relocating to Las Vegas, Nevada, leaving the city of Oakland for the second time in its history.

Marshawn Lynch gives the Raiders an opportunity to strategically distract the media and the fanbase while keeping relations relatively healthy during and after the relocation.  In addition, this move further positions the organization as a victim at the hands of Mayor Libby Schaaf and the City of Oakland.

Wherever “Beast Mode” goes, the media follows.  No athlete has ever been able to demand so much attention and coverage with so few words spoken.

This lovable character has taken on Scotland in a Skittles promotion:

He has been thrown out of a charity soccer match:

And so much more:

Usually when you hear the word “distraction” in the context of an NFL team, it has negative connotations.  Yet in this instance, this distraction will serve the Oakland Raiders well.

The national and local media coverage of Marshawn Lynch will help deviate the dialogue away from the impending move.  If only for a quick interview or soundbite, the Raiders will effectively alter the conversation through the distraction of a superstar character.

Like other superior and innovative brands in professional sports, Raiders fandom is not exclusive to the city of Oakland, the state of California, or even the West Coast in general.

Raiders Nation runs deep, rivaling the elite national fanbases of the league.  They could burn-bridges with Oakland and move on to greener pastures, but this move helps legitimize the organizational stance.

The Raiders, and the Davis family, sincerely care for the city of Oakland.  At least, that is the message and the interpreted perception.

The Chargers’ owner, Dean Spanos, made similar remarks regarding San Diego as his team fled for Los Angeles.  Yet given his personal history and the rumored negotiations with the city, the organization has burned a decent portion of the San Diego market as they move to share a more crowded market in Los Angeles.

By signing a hometown-hero, it further supports the narrative that the Raiders want to preserve the Oakland market – not just for profitable gains – but because the city has a sincere connection with the franchise.

If the Bay Area fans believe this narrative, then the Raiders will only be expanding its reach.  Preserving the Oakland market while exploring a new frontier draws a larger audience for Raiders broadcasts, which will lead to more national exposure on primetime platforms, thus further exposing this already popular brand.

The negotiations between cities (or states) and their local sports teams is a tiresome production of “he said/she said.”

Both sides insist that they “tried their absolute hardest” and continually point the finger at the other party when progress is not made.  Usually, in the end, the sports organizations win.

No serving mayor or governor wants to be responsible for a beloved franchise shipping off to another city.  These teams provide the city with a national identity and a local source of pride.  And more importantly, failed negotiations and a resulting relocation could critically damage a politician’s career.

Yet recently, elected officials have become stingier with their public funds, daring owners to dig deeper into their pockets to pay for a larger portion of the new stadium.  This approach has been met with applause in certain circumstances and crushing departures in others.

In this particular situation, the Davis family does not have the exceptional wealth other NFL Owners possess.  According to Forbes, the NFL’s richest owner is Paul Allen of the Seattle Seahawks with a personal net worth of $17.8 billion.

A majority of the owners exceed $1 billion in net worth, yet Mark Davis is positioned at a humbling $500 million.  While that is still more money than most Americans could ever dream of, it is certainly conceivable that the Raiders needed public funds to build their own stadium, as their current home (The Oakland Coliseum) is a long-suffering eyesore.

The City of Las Vegas stepped up with an offer Mark Davis couldn’t refuse, and the rest is history.

As eluded to in the previous point, the Raiders would prefer the general public to believe that the Raiders exhausted every option to stay in the Bay Area.  The signing of Marshawn Lynch is a peace-offering – in a way – to Northern California and its Raiders fans.

Further personifying the victim of harsh negotiations with the City of Oakland, the Raiders are utilizing Marshawn Lynch as a pawn in a public relations chess match.  Getting one of Oakland’s own in your corner can go a long way in public perception: “If someone like Marshawn Lynch, who represents Oakland as well as any public figure, can come to grips with the Raiders leaving once again – maybe I can too.”

Understand that I’ve been known to approach these types of stories with a pessimistic perspective.

It is possible that the player personnel department was the primary orchestrator of this signing.  Or perhaps Marshawn Lynch willingly came out of retirement on his own accord.

But this signing reeks of damage control, a well-played public relations maneuver.

Whatever it may be, at least we get another season of Beast Mode.

Be sure to checkout my thoughts on the Big Baller Brand, as well as other articles from NM Sports.