NHL Commissioner Gary Bettman is perhaps the most scrutinized commissioner in all of major sports.  And if you witnessed Roger Goodell’s warm welcome in Philadelphia during the NFL Draft, you understand the magnitude of that statement.

The NHL will not participate in the 2018 Winter Olympics in PyeongChang, despite identifying Asia as a frontier for hockey expansion and international growth.  Bettman has been criticized heavily for this irrational decision, and most of it is justifiable.

True hockey fans could probably add an additional dozen reasons to the “Why we hate Bettman” list, including rule changes, conference realignment, playoff bracketing, video reviews, and so on.  Yet one of the predominant reasons for the constant heckling may need to be readdressed.

A major emphasis of Gary Bettman’s 24-year tenure has pertained to the exploration of nontraditional hockey markets through expansion or relocation.  The NHL has abandoned comfortable and realistic markets in hopes of larger returns in superior metropolitan areas.

Since Bettman’s appointment as commissioner in 1993, these are a few moves that were met with great condemnations in the hockey community, in chronological order:

To assume Bettman is the primary influencer of these arrangements is simply incorrect, as finances and facilities consistently play a significant role in these types of discussions and dealings.  That won’t stop devout hockey fans from showering their fearless leader with boos and jeers every time he steps to a podium:

But perhaps it’s time to reevaluate…

The sport of hockey is unique, as it is fundamentally foreign to many Americans.  When considering competing sports such as football and baseball – American sports embedded in the nation’s fabric – it is easy to understand the uphill battle the NHL faces in legitimizing themselves to the American media and its common consumers.

This conundrum has impacted the league throughout its history, as they were even hesitant to expand beyond their Original Six organizations from 1942-1967, fearing hockey wouldn’t succeed in “foreign” cities like Philadelphia, Los Angeles, St. Louis and Pittsburgh.

One of the commissioner’s most important tasks in any sport is maximizing national television deals.  These deals – divided equally between all teams – help institute competitive balance despite an organization’s value, market size, or local television deal.  They also serve as the league’s largest single sum of revenue year-after-year.

One cannot maximize these contracts while hiding in smaller, safer, and traditional markets.

While many hockey purists continue to remember the Quebec Nordiques and the Hartford Whalers (and their legendary uniforms), it is important to understand the potential of hockey materialization in nontraditional markets.  And look no further than the Nashville Predators.

The Nashville Predators playing in the Stanley Cup Final is the best thing to happen to the NHL in quite some time.

For far too long, nontraditional teams have attempted to emulate those who reside in the league’s preverbal penthouse.  Do you know why the Detroit Red Wings haven’t deviated from their same boring look for more than eighty years?  Or why the Montreal Canadiens don’t hand out free t-shirts to make the crowd monochromatic?  Because they don’t have to.

Top-tier organizations don’t need to get creative.  Clam Chowder, Samuel Adams and the Bruins are equally etched into the social fabric of Boston.  The same could be said for many hockey-enlightened markets. They will sell-out games and create social buzz without much effort.

Organizations like the Arizona Coyotes, Florida Panthers and Nashville Predators do not possess that same luxury.  The strategies utilized by the Predators’ organization should become a blueprint for teams in nontraditional markets.

They gave up on joining the country club and threw a block party, Nashville style.

Every city has distinct qualities that generate civic-pride from its local residents.  For Los Angeles, it’s the glitz and glamour of Hollywood.  For Philadelphia, it’s the city’s storied history and blue-collar mentality.  For New York, it’s the aura surrounding its big stages and bright lights.

As for Nashville, they are the Music City with a fun, backyard-barbeque-like atmosphere.  The Predators have captured that mentality and delivered it to millions of viewers.

While some teams standardize their appearances to match traditional organizations, the Predators wear bright-yellow uniforms with a guitar-pick logo on their shoulder and a piano design on their collar.

Most organizations resort to one constant anthemist for their singular rendition of The Star Spangled Banner and O Canada.  Yet the Predators utilize their proximity to musical talent and make the pregame ritual as entertaining and organic as the game itself.

Some hockey teams have organists who play during intermissions and commercial breaks.  Nashville has a “Band Stage” where unproven musicians get a chance to play in front of thousands of Tennesseans. 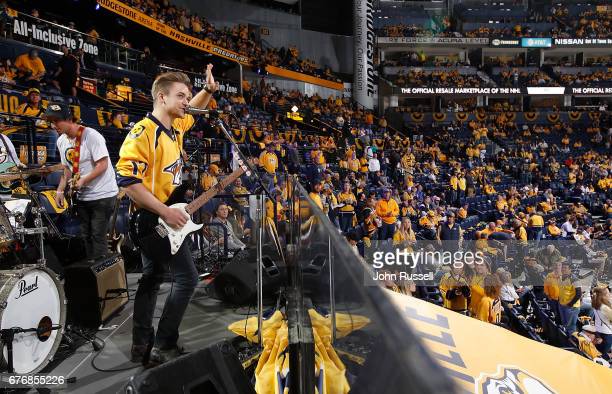 Cross-sport support is common, such as the Pittsburgh Steelers players who routinely attend Pittsburgh Penguins games.  The Predators added a Nashville-twist, bringing Tennessee Titans’ Quarterback Marcus Mariota to pump-up the crowd while his entire offensive line chugged Bud Lights behind him.

The Predators did steal the Red Wings’ octopi-throwing craze, but made it their own with more easily-accessible catfish.  It’s gross, it’s imaginably a waste of a good catfish (I’ve never tried it), but it grabs your attention.  The Predators even utilize it in corporate sponsorship content.

I am ready, are you? #StandWithUS pic.twitter.com/kJtpQhxylM

And finally, many fanbases attempt to rattle opposing goalies with disorganized chants.  The “Smashville” faithful took it up a notch, stunning the hockey world by emulating soccer hooligans.

These tactics are strange, but strange is great.  The Predators were able to get Wayne Gretzky, Keith Urban, Charles Barkley, Rex and Rob Ryan (who had a little too much fun) under the same roof to watch a hockey game.

This puts hockey on the map more than the Montreal Canadiens trying to capture their 25th Stanley Cup would have.

This galvanizes the 29th largest television market in the United States, potentially mesmerizing an entire city and getting them attached to the sport of hockey.  A city that conceivably couldn’t differentiate between the blue-line and the red-line just a decade ago.

Some traditional fanbases have taken exception to the rise of Smashville.  If you love it or you hate it, this is undeniably a great experience for the sport of hockey and its growth beyond frozen ponds and northern cities.

The key for Nashville is sustainability.  We have seen the Florida Panthers’ fans throwing toy rats on the ice in the Stanley Cup Final, the Carolina Hurricanes elevating the expectations of tailgating at a hockey game, and the Dallas Stars’ faithful refusing to sit for an entire series.  We have also seen these fans dissipate through seasons of hardship.

Yet as it stands right now, Nashville has exceeded expectations and paved the way for the sport of hockey in Tennessee.

The Nashville Predators – thanks to wacky rituals, rabid fans and a personable superstar like PK Subban – have returned the favor in their nineteenth season.  The NHL took a risk, and Nashville made it their own.

Perhaps it’s time to give Gary Bettman a little credit.

Checkout my posts about the NBA’s Parity Problem and my First Installment of Uniforms of the Week.