A highly anticipated NBA Finals matchup is set to tip-off tonight after a dull, predictable season.

Yet the participants of tonight’s NBA Finals was all but confirmed 11 months ago when Kevin Durant signed with the Golden State Warriors – and one could make an argument that a Golden State-Cleveland rematch was inevitable with-or-without Durant.

A certain lack of parity is good for any league.  Dominant teams become polarizing in the eyes of the common consumer, drawing attention, storylines, eyeballs and eventually more revenue.

Think about how many football fans tune into a New England Patriots game when their team isn’t televised – if only to root against them.  The same could be said about Sidney Crosby and the Pittsburgh Penguins, Michael Jordan and his Chicago Bulls teams, and any given New York Yankees team.

Parity has been an evergreen problem in the NBA, as dynasties abound much more frequently in basketball than any other Big-4 sport.

However, the problem is not with the final result, rather the journey.  It is unquestionably monumental to have an NBA Finals “Trilogy,” a phenomenon that has never occurred in NBA history.

Think about it, the NBA is the most drama/storyline/entertainment-driven league.  These world-class athletes are equal parts celebrity and basketball player.  Hollywood affiliated terminology like “Trilogy” is exactly the script-like storylines the league dreams of.

This series will last anywhere from 4-7 games, ranging from 9-18 days.  The 212 days of competition leading up to this crescendo is the damning part, and the timing is unfortunate.

According to Recode.net, yet another half-million Americans cut the cord last quarter.  If you’re unfamiliar with this terminology, let me fill you in:

Millions of Americans are fed-up with cable companies and satisfied with the alternatives of streaming services like Netflix, Hulu and Amazon Prime.  This is far from just a millennial trend, as cable companies and their major networks should begin to worry.  ESPN already has. 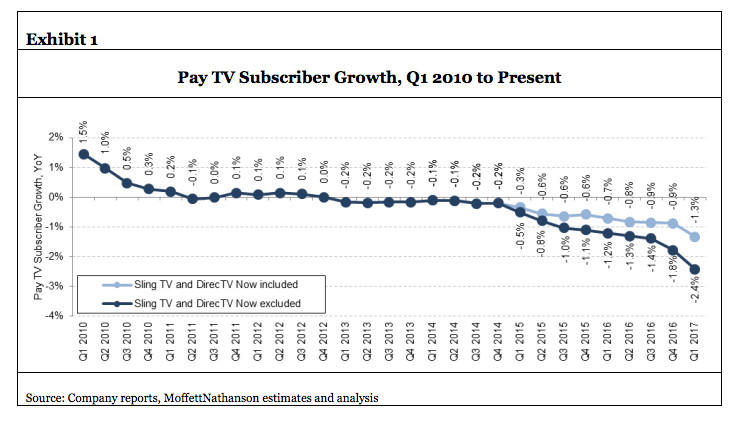 Sports was supposedly the saving grace of traditional television.  Most Americans can catch their favorite shows on alternative entertainment outlets, but not their sporting events.  These broadcasts are seemingly the last-standing appointment-based television programs.

According to AwfulAnnouncing.com, via the Sports Business Journal, the NBA television viewership nosedived in the 2016-2017 season, as local ratings dropped 14 percent from the previous year.  National television ratings were also down.

Blind NBA supporters will undoubtedly have an arsenal of excuses, all relatively valid:

The NFL’s ratings were also down.

This is telling of the cord-cutting trend exhausting cable companies.

The center of the basketball universe this season consisted of Cleveland, Oakland, Oklahoma City and San Antonio.  Some of the cellar-dwellers of the league hailed from New York, Philadelphia, and Los Angeles (Lakers)… certainly not ideal for the NBA.

A result of – one of many – missteps by Commissioner Adam Silver (perhaps another article for a different time).  But this can be traced back to the heart of the issue.

LeBron James, the Cleveland Cavaliers, ESPN, my friends, and my grandmother all knew who would be in the NBA Finals on March 18 when James, Kyrie Irving and Kevin Love rested against the Los Angeles Clippers on ABC.  Just as we all knew on March 11 when Steph Curry, Klay Thompson and Draymond Green all rested against the San Antonio Spurs on ABC.

This unprecedented lack of parity has made the NBA Finals must-watch-television but the regular season – and the playoffs – irrelevant.

And yes, the playoffs were absolutely irrelevant.  The Warriors and Cavaliers combined for a 24-1 record on their way to “The Trilogy.”  The experience was equivalent to being forced to watch a movie you’ve already seen several times – a movie you considered lackluster when you saw it the last time.

To give you some perspective, the Stanley Cup Final consists of the reigning champion Pittsburgh Penguins (doesn’t support my argument) and the 16th seeded Nashville Predators… The. Sixteenth. Seeded. Nashville Predators. This certainly does not make the NHL a better product than the NBA, but it is incentive to actually watch the playoffs. Anything can happen.

Consider a casual NBA fan.  He’s thinking about saving a couple bucks a month by ending his cable television deal.  He’s already stopped tuning into his local team’s games, what’s the point? If you’re not a fan of the Warriors, Cavaliers, Spurs, Rockets, or Celtics – and don’t have any hope for the future like the Timberwolves, Bucks, or 76ers – you’re in no-mans-land.  Just cut the cord and go to a bar or stream the NBA Finals.

Elements such as a soft salary cap and maximum constraints on player contracts are based at the foundation of this problem.  Adam Silver and the NBA are currently biting-the-hand that feeds them through these concepts that enable two super teams and twenty-eight nonfactors.

In 2014, the NBA announced a 9-year, $24 billion TV deal with ESPN and Turner Sports.  An unprecedented amount of money that enables role players like Luol Deng and Joakim Noah to be paid $18 million per year.

Two years into the current deal and ESPN and Turner Sports are bleeding.  The loss of subscribers has seriously dented the two major networks, and the NBA is not helping.

Marquee regular season matchups – such as Golden State vs. San Antonio, or Cleveland vs. Los Angeles – were supposed to draw millions of views, drawing millions of eyeballs watching dozens of commercials, bringing in millions in advertising revenue.  The NBA failed in holding up their end of the bargain.

When the current CBA expires in 2023, who knows what the state of television will be like.  It is likely the NBA won’t be set to receive another $24 billion from major networks given their present predicaments.  The NBA could be inclined to strike a deal with streaming services like Amazon Prime, but their advertising capabilities are currently far inferior to traditional television.

This is not doomsday for the NBA.  Basketball has grown exponentially overseas, as the world’s biggest superstars continue to push the limits of on-court performances and off-court marketing and recognition.   They have other revenue options to explore before 2023, such as legalized and standardized gambling.

But don’t think that an invigorating NBA Finals can salvage an abysmal regular season and an uninspiring NBA Playoffs, especially from the perspective of ESPN and Turner Sports.  It can’t… and it won’t.