Sports enthusiasts often talk about the significant differences between regular-season and postseason play. Each sport has its own clichés regarding the important factors that are required to continuously emerge victorious in postseason action.

Recently, Fox’s Colin Cowherd introduced the phrase “Man-alytics,” where he believes some of the advanced analytics utilized in the NBA become rather meaningless in postseason action. This theory concludes that unmeasurable attributes such as coaching, toughness, and awareness trump common efficiency and pace statistics, as well as some even more common statistics like shooting percentage, rebounds, etc.

While, as a sports fan, I believed this to be common knowledge regarding postseason action – I wanted to test this theory with some introductory analytics.

I wanted to develop two separate predictive models, for the intention of predicting the total number of wins, for regular season and postseason action. The 28 variables initially used in this linear regression are listed below, as it includes basic team statistics for offensive and defensive production, as well as some advanced analytics aimed to measure efficiency and pace.

A) Comparing and contrasting which statistical variables are most important for winning in the regular season versus the postseason.

B) Comparing and contrasting the accuracy of both models.

If “Man-alytics” are true, then I believe there will be some discrepancy between the variables in the predictive models, as well as significant differences in accuracy (regular season being much more accurate than postseason).

This is an imperfect test of course, as each NBA team plays a finite amount of regular season games (82), while the participating teams play varying amounts of games in the postseason. Therefore, the accuracy of the Postseason Model should be expected to be lower than the regular season. Just how much lower could help illustrate the truth of “Man-alytics.”

The initial regression eliminated eight variables. Using Mallow’s CP Selection Model, the most optimal predictive model is shown below. The R-Squared for this model was 93.37%, which essentially means this model is believed to explain 93.37% of the variability for a team’s total wins in a given season. 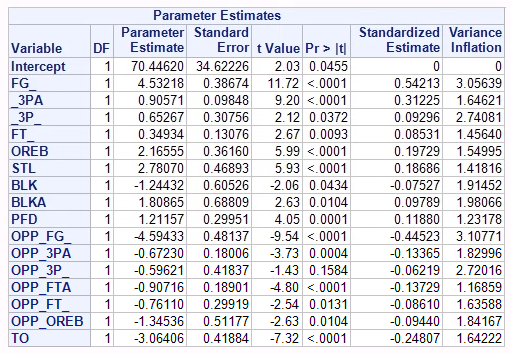 Positive Relationships (the higher this statistical category, the more wins one is bound to have) in order of significance (the closer the coefficient is to zero, the less influence it has on the predicted outcome):

Negative Relationships (the higher this statistical category, the less wins one is bound to have):

When testing this predictive model on the validation set (2018 Regular Season), the average accuracy was about 91.5%, close to the adjusted R-Square score of 93.37%.

Tanking? The Dallas Mavericks, whose owner Mark Cuban openly discussed “Tanking,” were projected to win about 36 games. They only won 24. An interestingly and alarmingly inaccurate projection.

The initial regression eliminated six variables. Using Mallow’s CP Selection Model, the most optimal predictive model is shown below. The R-Squared for this model was 60.03%, which means this model is believed to explain 60.63% of the variability for a team’s total wins in the postseason (much lower than the regular season model).

Positive Relationships in order of significance:

Negative Relationships in order of significance:

When testing this predictive model on the validation set (2017 Playoffs), the average accuracy was 54.58%, somewhat close to the adjusted R-Square score of 60.03%. 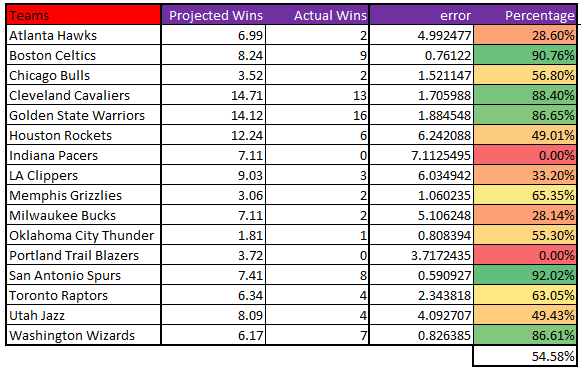 A) Comparing and contrasting which statistical variables are most important for winning in the regular season versus the postseason.

Steals: Field Goal Percentage and Steals were the most important positive variables in each model. While the significance of field goal percentage is seemingly a foregone conclusion, steals is not a statistic that is as popularized in terms of importance. Furthermore, Steals became even more important in the postseason, leapfrogging Field Goal Percentage, which perhaps eludes to the “Defense Wins Championships” mentality.

Rebounding in the Playoffs: It seemed more important to control the glass (limit opposing offensive and defensive rebounds) in the playoffs than in the regular season. Only Opposing Offensive Rebounds were included in the Regular Season model.

Blocks are counterproductive: Most of the variables and its respective relationship with the dependent variable make sense… except the variables Blocks and Blocks Allowed. According to both models, blocks a given team averaged per 100 possessions would actually hurt the win projections. Oppositely, for the regular season model, the more blocks one team allowed per 100 possessions, the more wins they would claim. Perhaps the more blocks a team has signifies the need for rim protection, which could indicate that the team allows the opposition to get the rim too frequently. Oppositely, the more blocks one team allows may indicate that they are simply getting to the rim more frequently and therefore risking the threat of blocked shots more frequently.  Just a theory.

Assist Ratio: Like blocks, the assist ratio (the percentage of a team’s possessions that end in an assist) oddly had a negative relationship with winning in the postseason model. Perhaps this is an example of isolation-oriented offenses, such as the Oklahoma City Thunder and Houston Rockets, finding success in recent playoffs. This is something that can be evaluated further, as some of the teams without a superstar in the 2016 Playoffs (Detroit, Atlanta, and Dallas) had high assist ratios, but did not find much success.

B) Comparing and contrasting the accuracy of both models.

However, the substantial differences can also help illustrate the possibilities of the “Man-alytics” theory being somewhat correct. While the regular season model was highly accurate in relation to the validation set (nearly 92% – and if you eliminate the outlying and tanking Dallas Mavericks, over 93%), the postseason model was not (about 55% accurate). The previously mentioned unmeasurable variables – coaching, toughness, awareness – play a more significant role in the variability of total wins in the postseason than in the regular season.

Of course, there are more games in the regular season – thus more of a likelihood for the statistics to paint a clearer portrait of a given team. However, I did not want to include more seasons in the training sets. Basketball, like many sports, is ever-changing. What was important five years ago may not be as applicable to today’s game.

While this is an imperfect predictive model with basic linear regressions, I believe it is safe to conclude that the “Man-alytics” theory has some statistical validity.

Check out my quick thoughts on Legalized Gambling on the Horizon.