When you grow up a naïve, wide-eyed, sports-crazed kid, your young life revolves around your team. Your focus becomes so narrow that you would give literally anything just to see your team emerge victorious.

Growing up an Eagles fan takes that concept to different extremes.

If you don’t roll out of bed on Sunday mornings and put on a Midnight Green or Kelly Green jersey, then you will never truly comprehend what this team means to the Delaware Valley.

The euphoria of victory and the misery of defeat have a lasting impact on the City of Brotherly Love that tend to linger well beyond Sunday nights.  Outsiders tend to brand the fanbase based on outdated headlines and a collective outward projection of complex inferiority.

But underlining all of those emotions is that same childlike sense of commitment, innocence, passion and devotion.

Regardless of age, nearly every Eagles fan would have sacrificed it all, slit their wrists, ran through a brick wall, whatever it took… just to see their Birds finally win it all.

But at some point in your life, you may realize that these athletes you have admired are people too.  Many times, the game that you love is simply their occupation. While they may hate to lose, it doesn’t keep them up at night the way it might for a true fan.

Understanding that dynamic can be painful, especially as an Eagles fan.

Yet from 1996-2008, there was one athlete in Philadelphia that truly cared. He cared just as much as us psychotic fans by consistently playing with the same level of sacrifice and dedication. He validated the passion – the years of pain, agony and suffering.

That player has reached football immortality and will be enshrined in the Pro Football Hall of Fame this evening.

Brian Dawkins was a world-class athlete.  Perhaps the greatest safety to ever step onto a football field. But his connection with a fanbase, an entire city, and a young kid such as myself, went well beyond those abilities.

At a young age, I rooted for every member of the Philadelphia Eagles equally. I loved the stars (I had a Donovan McNabb and Brian Westbrook jersey) and I loved the overlooked role players (I had a Corey Simon, James Thrash and Hugh Douglas jersey).

But one game changed that forever.

The Eagles were set to play in their fourth consecutive NFC Championship Game, a game they lost the previous three seasons. Even as a 9 year old kid, I could easily sense the overwhelming feeling of doubt and pessimism amongst Eagles fans. I cried following the past three NFC Championship Game defeats, and I knew tears would flow once more if the Eagles were to fall to the Atlanta Falcons.

The game was, surprisingly, off to a good start. The Eagles had a 14-3 lead late in the second quarter. But that feeling of impending doom was still lingering.

Then Brian Dawkins set the tone. He put those feelings to rest. He inspired an unprecedented amount of hope with one resounding hit.

Dawkins tossed the 260 lbs. Alge Crumpler like a rag-doll. He danced and flexed like a possessed freak. In one instance, Dawkins showcased everything the blue-collar city valued. And in one play, three years of gloom became one day of pure hope, confidence and eventually… jubilation.

The Eagles went on to advance to their first Super Bowl appearance in 24 years. While what occured two weeks later will undoubtedly sting for eternity, Brian Dawkins morphed into my superhero on that glorious January day.

From that point on, I wanted to wear the #20 any chance I had. I wanted to be “Weapon X,” even if I was just playing soccer or basketball.

The more I watched Dawkins, the more I wanted to duplicate his personality on-and-off of the football field:

I was 14 years old when the Eagles’ general manager Joe Banner inexplicably let Brian Dawkins leave Philadelphia to become a member of the Denver Broncos.

I cried then, too.

I was 17 years old when Brian Dawkins came back to Philadelphia and the organization retired his #20.

I was in the building when they revealed his banner… and I shed some tears then as well.

And when I was 18 years old, I finally had the opportunity to meet my hero at a local autograph signing event.

I spent nearly all the money I had in my bank account at the time just so I could witness him signing a picture, despite the fact I had about two dozen pictures of him already.

Earlier that year, I laid out all of the #20 jerseys I had accumulated throughout my athletic career on my bedroom floor and took a picture of it. That day, I printed it out, not knowing what I was going to do with it. 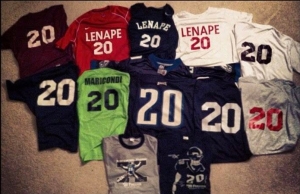 I was nervous to meet my hero, but even more nervous he wouldn’t live up to my lofty expectations. In my eyes he was a superhero… an immortal.

Most people at this event were there for the resale value of the authentic memorabilia. Dawkins treated them kindly.

When it was my turn in line, he dutifully signed a picture I selected from the store’s selection. When he finished inscribing “LAST TO WEAR #20,” I placed the other picture, the one with all of my #20 jerseys, in front of him.

I simply thanked him for the impact he made in my life, for always being such a positive influence and being my role model.

Dawkins looked at the picture for a few seconds, like he had to register what he was looking at. Then he looked up at me and smiled.

We talked for only a few more seconds before I shook his hand and walked away (the firmest handshake I’ve ever received).

They say don’t meet your heroes, but most people’s heroes are not Brian Dawkins.

Even to this day, as a young and (somewhat) mature professional, I continue to learn from the Hall of Famer. Whether it’s how candid he has been about dealing with depression and other personal issues, or simply how he continues to serve his community, he is still my larger-than-life hero.

So when Brian Dawkins says “We (Philadelphians) are being inducted into the Pro Football Hall of Fame,” it truly feels that way.

And for that, I am eternally grateful.